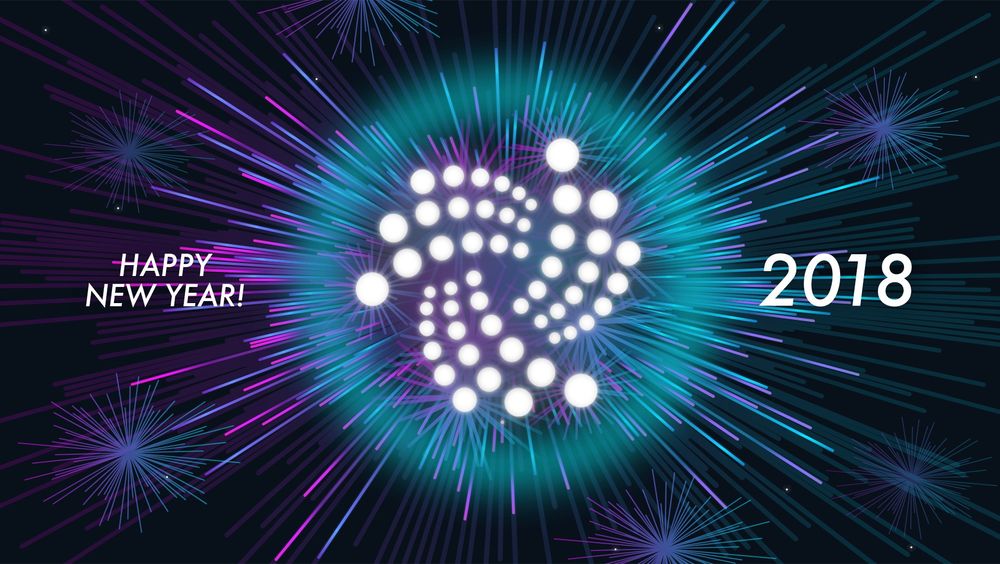 It would be impossible to list every one of the milestones, significant events or other achievements that took place in the IOTA cosmos this year. However, here is a nonexhaustive cheatsheet of some noteworthy things that transpired in 2017.

2017has been an incredibly eventful year for the IOTA project. Milestones have been reached, records breached, and numerous new people have joined the team. There has been an explosive growth in our community and independent projects utilizing IOTA. A metric that captures this growth is our subreddit’s growth over the last months:

Looking back at 2017 is eliciting motivation for 2018. Much of the groundwork for 2018 has been laid throughout the year, which means that this new year will be even more packed with progress and events than 2017.

We spent a significant amount of 2017 establishing the IOTA Foundation as a gemeinnützige stiftung / non Profit foundation in Germany. While being the world’s first approved non-Profit in Germany focused on distributed ledger technology was a huge milestone in itself, it’s really in 2018 that the Foundation will be properly established and its impact as a German non-Profit will be made very apparent from a practical point of view.

In the face of all the progression that has occurred in the project so far it is easy to forget just how young IOTA really is. It is still very early days in the broader perspective, IOTA has seen an explosive growth in the last few months, to the point where the demand for IOTA almost outweighs the available human resources and capacity. The Foundation is being inundated daily with requests from corporations, non-profits, academia, and start-ups who are either exploring distributed ledgers for the first time or shifting from Blockchain to Tangle. The latter is happening more and more after Blockchain’s limitations have been demonstrated thoroughly through 2017. The main bottleneck of IOTA’s growth internally now is lack of human resources. Establishing proper structure and streamlined processes, as well as onboarding tens of new developers and other vital human resources, will be the number one priority at the beginning of 2018 to meet this demand and thus continue IOTA’s adoption and goal of establishing it as the de facto DLT for the Industry 4.0 era.

In 2017 we have been conducting a lot of research on optimization of IOTA. 2018 is the year where these developments will be implemented, with the goal of reaching a production ready state by the end of 2018 and begin the international standardization process together with the industry. We will also be hosting several virtual and physical hackathons throughout the year to drive the development around the IOTA protocol.

IOTA is going global. Although IOTA has several international projects and the team is distributed all across the globe, so far the overwhelming efforts have been centered in Europe. In 2018 this changes, in addition to our Berlin, Oslo, and Chicago offices we already have seven more local offices distributed across Earth in strategic regions planned. These will be established by the second quarter of 2018. We consider it vital to have a local presence with people who can conduct face to face meetings on a whim and who has a natural understanding of the culture and ecosystems in their vicinity.

The request for more exchanges to make it easier for people to obtain iotas has been a constant topic in the past year. Precisely because IOTA’s protocol is such a giant leap forward from regular Blockchain architecture its integration with exchanges takes a bit longer, especially for the first movers. In the midst of new regulations and overwhelming volumes that none of the exchanges was ever built to handle this has proven to be a time-consuming endeavor. However, we are now happy to confirm that several large and small exchanges are done with the technical implementation of IOTA. From here on it is up to the respective parties as businesses to decide when and how they plan to unveil and launch IOTA on their platforms, but we expect most to do this in the very beginning of 2018.

This year we announced the several million dollar Ecosystem Fundfor development of modules, libraries, tools, tutorials and general content which is meant to grow the IOTA ecosystem. Our recent addition John Licciardello is our dedicated Ecosystem Fund manager, so the process from application to approval is now streamlined. We have received a lot of interesting applications that will be interesting to follow as they evolve into mature projects in 2018. The first applications that have been approved will be announced in the first week of January.

There is way too much planned and lined up for 2018 to cover in this preview.