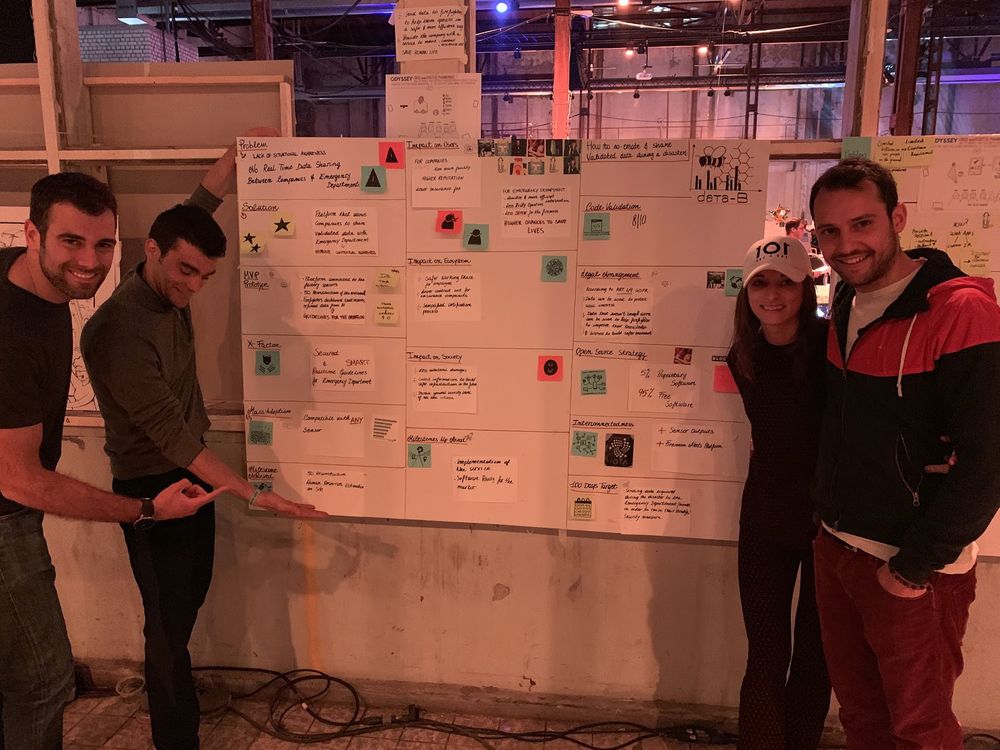 From the 11th to the 15th of April the biggest DLT & AI hackathon in the world took place in Groningen, The Netherlands. The Odyssey Hackathon returned for its third year with 99 highly motivated and capable teams who were supported by 200 so called Jedi’s (volunteering experts with specializations in all kinds of fields like Legal, Tech, Business, etc.).

The IOTA Foundation was there to support the teams working with IOTA technology both as a Sponsor / Ecosystem Member and with Jedi’s helping IOTA using teams out. The end result is eight teams participating using IOTA technology in six of the 20 different tracks with three of these teams winning their track. This is a writeup about how the Hackathon went down.

The Odyssey Hackathon is a very well prepared event. Months before it starts the first preparatory events already take place at various locations throughout The Netherlands. At these events possible teams explore the different challenges available and will learn about how they can get the most out of the Hackathon. People without a team can meet up at these events as well to form a new one and discuss their plans. Even though these are only preparative events teams from all over the world fly in to get the most out of the Hackathon.

The day before the hackathon really took off was used to provide the teams participating with all kinds of masterclasses by experts in the field. There were 90 minute masterclasses about technology, but also things like legal/GDPR regulation and pitching to a jury or investors. The teams split themselves up during these days so the team as a whole can participate in as many masterclasses as possible. The IOTA Foundation did a masterclass as well about all the IOTA resources that are available to use for the participants.

On Friday the Hackathon venue opened its doors. All volunteers were briefed, an opening ceremony took place and everyone started to work. Every team received a big canvas to share their ideas and for a lot of teams their day mainly consisted of fine tuning and validating their plans with their team members and jedi’s thinking along.

On the second day of the Hackathon all the teams worked tirelessly on creating their prototypes. Because most of the development happened on this day all Jedi’s were very busy helping the teams out with questions and validating if the ideas they had were feasible. Lot’s of meetings took place and a lot of teams worked throughout the night with very little or no sleep to meet Sundays 12 o’clock deadline.

The deadline of the hackathon was set on Sunday at noon. After little sleep for many of the teams all worked very hard towards finishing up as much as possible before this deadline. Last minute problems were quickly tackled with the help of the available Jedi’s. Once the deadline passed everyone stopped working and the Jury started their work. Every team was judged by a jury in 12 minutes time based on different factors including both automated and manual analysis of code quality and completeness.

After this round the teams were done, many taking a power nap on the spot. The jury took another 2 hours to reach consensus before the award ceremony itself took place. Every team won a prize but the grand winners consisted of 1 team per track. From the 20 tracks available 3 were won by teams using IOTA Technology.

Team Edgica won the “Incentivizing sharing information” track by building a solution for the safety of hazardous material transportation by logging and validating the relevant data using the IOTA tangle.

Team VX Company won the “Building a Distributed Data Ecosystem” by building a protocol to facilitate a distributed data ecosystem that gives digital identities the ability to grant and retract permission to add external data sources to another identity.

Team ChainMix won the “Becoming an Oracle” track by builing a Invoice fraud prevention solution based on IOTA calledCheck Cheque.

Team Noize used IOTA technology to create a prototype for a fire detection and monitoring system in the “co-creating and sharing validated data during a disaster” track.

Other teams working with IOTA were Team Model FAMily in the “Building a Distributed Data Ecosystem” track working on a solution for storing real estate data on a public ledger and Team PowerChaingers and Team Grid Masters in the “Mobile Virtual Power Plant” track both working on a smart electric grid solution using IOTA.

The hackathon did not end there for the winning teams. The day after the hackathon ended the same venue hosted another event called Odyssey Ignite where only the track winners and challenge holders, other stakeholders and investors were invited to discuss follow ups on the winning projects. A great opportunity for the winning teams to connect and get introduced to parties that are otherwise hard to reach. Almost every team here ended up with multiple follow up appointments at investors, incubators, established multinationals and government offices to find out if their proof of concepts can be turned into a real product in the future.

The Odyssey hackathon 2019 was a great event to attend. Working together to make the impossible possible, showing what the DLT space is all about and giving a glimpse of what we can expect in the near future. We want to congratulate all participants in the Hackathon for their creations and thank anyone involved in making this event a huge success.