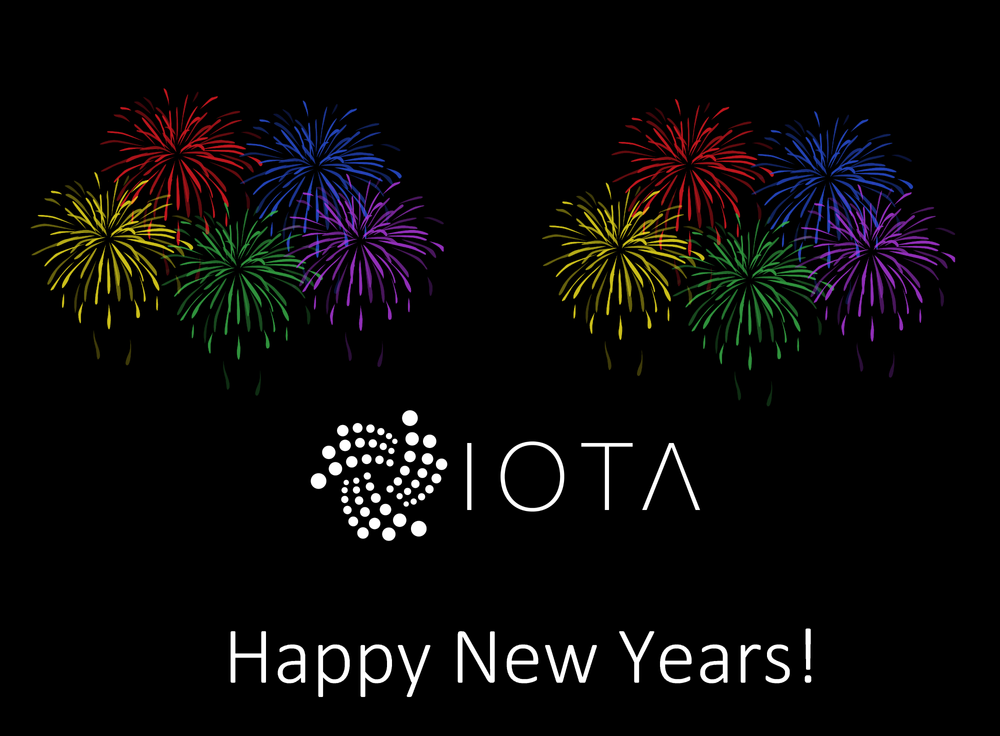 As we find ourselves at the twilight between 2016 and 2017 it is time for a brief summary of the year behind us, as well as a teaser of what is to come.

2016 has been an eventful year for IOTA, starting back in early January with alpha testing of the world’s first Directed Acyclic Graph / Tangle based distributed ledger. The first DLT that goes beyond blockchain. Indeed IOTA is the world’s first digital settlement system without any fees which now got over three million successful transactions in it. ­In those exciting 12 months we have gone through numerous iterations and optimizations of the core protocol, attended numerous conferences to spread the vision of IOTA on different continents, developed several tools for developers, and also onboarded and made partnerships with seminal thinkers and leading companies in the wide sectors that this new kind of distributed ledger can add value to. IOTA has been covered in Forbes, ReadWrite, TechCrunch etc., and more and more companies approach us to learn more daily.

2017 will be the year when IOTA is truly ‘launched’ and real-world adoption via deployments start occurring. There are a lot of projects going on with companies that are now very close to being revealed, some dating back to 2015. Now that the networking is nearing a stabilized state we are already preparing the official exchange launch date with several of the largest and most reputable exchanges in the space. We are also very actively developing the IOTA Sandbox and Libraries for IOTA that will make utilizing IOTA for your application/curiosity very simple and user-friendly. We will also be hosting several IOTA Hackathons in the new year with different partners, starting on the 27–29 of January with the Hack the Valley hackathon together with Thomson Reuters and Ethereum. To participate and stay up to date on this join #hackathons on our Slack.

The successfully grassroots-funded IOTA Foundation is under approval registration in Germany as an official non-profit Stiftung that will be responsible for developing and maintaining the core open-source protocol of IOTA. We have already got several big companies to sign letters of intent to join the foundation once it is officially up and running within the next couple of months. There will be a lot of big news surrounding this, including the official IOTA Foundation website and vision/mission statement in the coming weeks. As everyone has been able to see in the past weeks, we have already onboarded some very talented and influential people to the Foundation, and we got several more lined up that will be unveiled in the next few weeks.

There are currently tens of different venture capitalists, some very large and well-known, that are closely monitoring the IOTA ecosystem and what kind of start-ups develop on top of it. We are approached by VCs on a weekly basis that wants to know how to invest in the IOTA ecosystem through start-ups. So the soil is fertilized for your seeds, if you ever wanted to realize your ideas and become an independent gründer, you have a unique opportunity in this time window. The more entrepreneurs and ventures spawned from the IOTA ecosystem, the better for the platform itself. So I invite all entrepreneurs to realize their visions and we will assist you in making it a reality.

If you consider yourself an activist with a particular ideology or in general just want to disrupt the status quo we also got a lot of effort for you to get involved with. IOTA’s architecture is inherently decentralized on a level that no blockchain can match, due to the fact that users and validators are one and the same in Tangle. There are already several initiatives on eGovernance and decentralization going on in IOTA; if you recognize yourself as someone who can contribute concretely and wants to be part of this ‘revolution’ PM me and I'll introduce you to these different projects.

There is nothing inherently wrong with speculating or wanting a profit, but I will repeat what I have said ad nauseam: you will be a lot closer to achieving this goal by actively participating/funding efforts that subsequently reflect itself in the valuation of the tokens you hold.

You are the backbone of the IOTA project. The number one priority of 2017 is to make the IOTA platform developer inviting and friendly. Whether you are working on IOTA libraries and tools or just want to experiment with the technology, we first and foremost welcome you into the IOTA universe. Secondly, we encourage you to actively vocalize your thoughts in the #developers channel on our Slack.

We will be providing numerous incentives for developers to join the IOTA ecosystem in 2017, and also invite all holders of IOTA tokens to participate in this incentivization by putting up bounties, funding hackathon teams, and pooling resources together to enable the developers to create the necessary infrastructure and environment for a ‘snowballing effect’ to take place in the IOTA ecosystem which draws more talent towards the project.

While 90% of all current communication in the IOTA community takes place on Slack, we also ought to establish more permanence and presence of discussions by engaging the forum and Reddit. We have integrated the forum with Slack so that every time someone makes a post in the forum the entire Slack can see it. I highly encourage everyone to participate in discussions on the forum so that newcomers will be able to read through it in an easy fashion and be inspired to join the project. The same goes for Reddit. Reddit is still the most used website for most people — the front page of the internet — with undoubtedly the largest following of developers and crypto-enthusiasts on the internet, therefore having an active Reddit is vital. It has served as the invaluable backbone of both Bitcoin and Ethereum, so as a community member take it upon yourself to establish www.reddit.com/r/IOTA as an active avenue for discussions around the technology and vision behind the project. Go out there and participate/host meet-ups based around IoT, distributed ledger and IOTA. This means YOU have the ability and responsibility to have a clear impact on the project itself, don’t be a bystander.